A particularity of the park is a karst source

The source in question is the karst source named Davjek in the isolated karst of Kozjanski park. A characteristic of karst sources is a great fluctuation of flow and occasional turbidity at high water levels. Its diameter is 1 m and it continues into a stream, where there is another smaller source that is used also for drinking. The stream flows into the River Sotla. The hollow itself is just some 10 m long and 8 m wide. The source was created on the contact between the slope and the surrounding lowland, that is on the contact between the permeable limestone and impermeable marl. Davjek is a wonderful example of a hollow and a karst spring, which lends itself beautifully to picnics, hikes in the area and smaller parties. 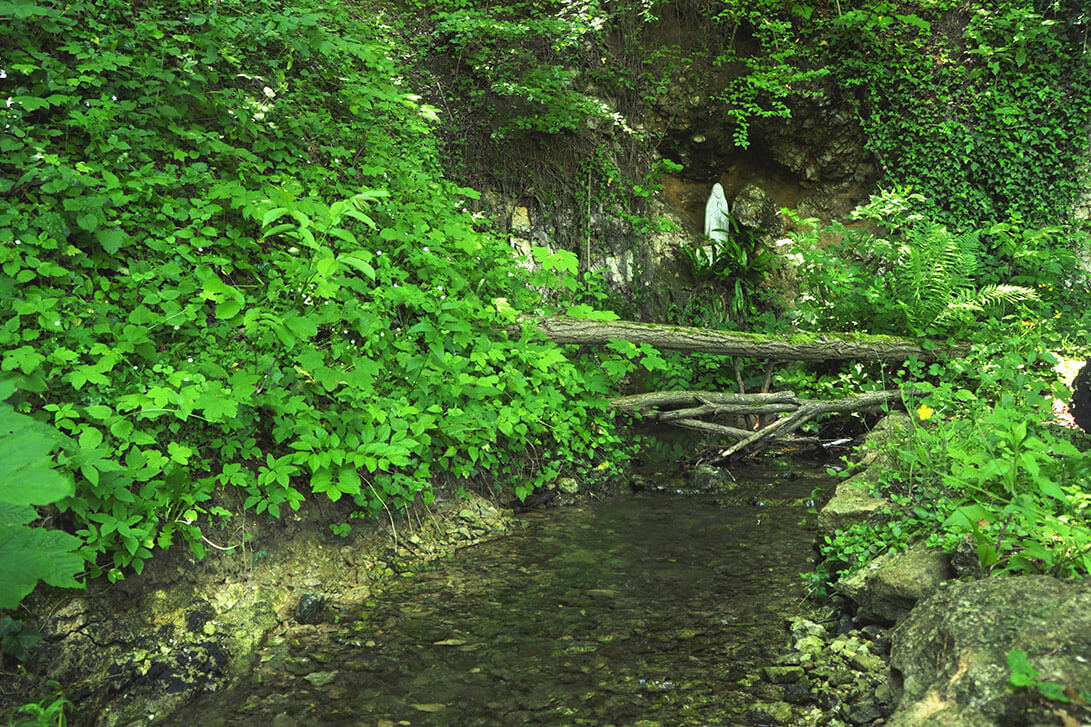 The most castle-like of Slovenia’s castles

Podsreda Castle, ‘the most castle-like of Slovenian castles’ has a special place among the castles in the Kozjanski park area, as its rich cultural activity continues well into the present day. It is a rare example of the Romanesque style in Slovenia. In the past 30 years, it underwent a thorough restoration from a more or less dilapidated state to an important venue for events and to the emblematic centrepiece of the comprehensive offers available in this part of Slovenia. Podsreda Castle fully comes into life in particular in the warmer months when it hosts many events that see the participation of domestic and international artists. 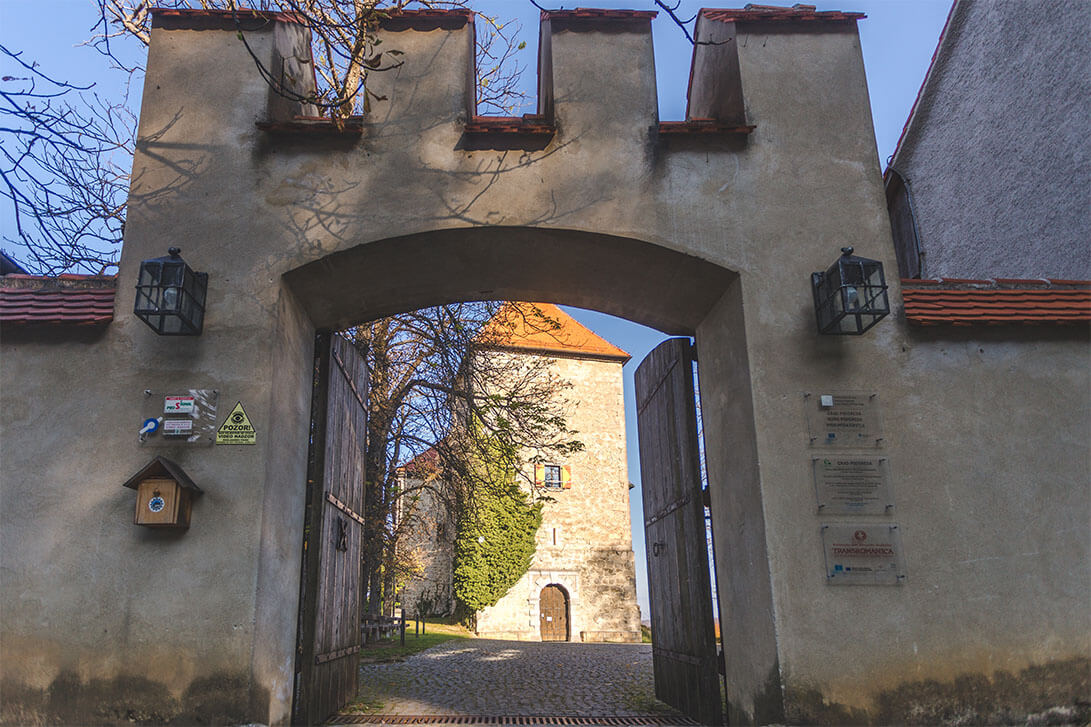 From the grain to the mill

The Levstik mill or today’s residential house with the mill was built in the mid 19th century parallel to the bed of the River Bistrica. The left part of it was the living area, the right the mill that only occupied one room. Two mill mechanisms are set up, one for white flour and the other for blends, the power provided by water from below. Sources mention the mill for the first time in a charter from 1801. You may visit the mill building with two mill mechanisms, a display of grinding and the operation of the entire mill. 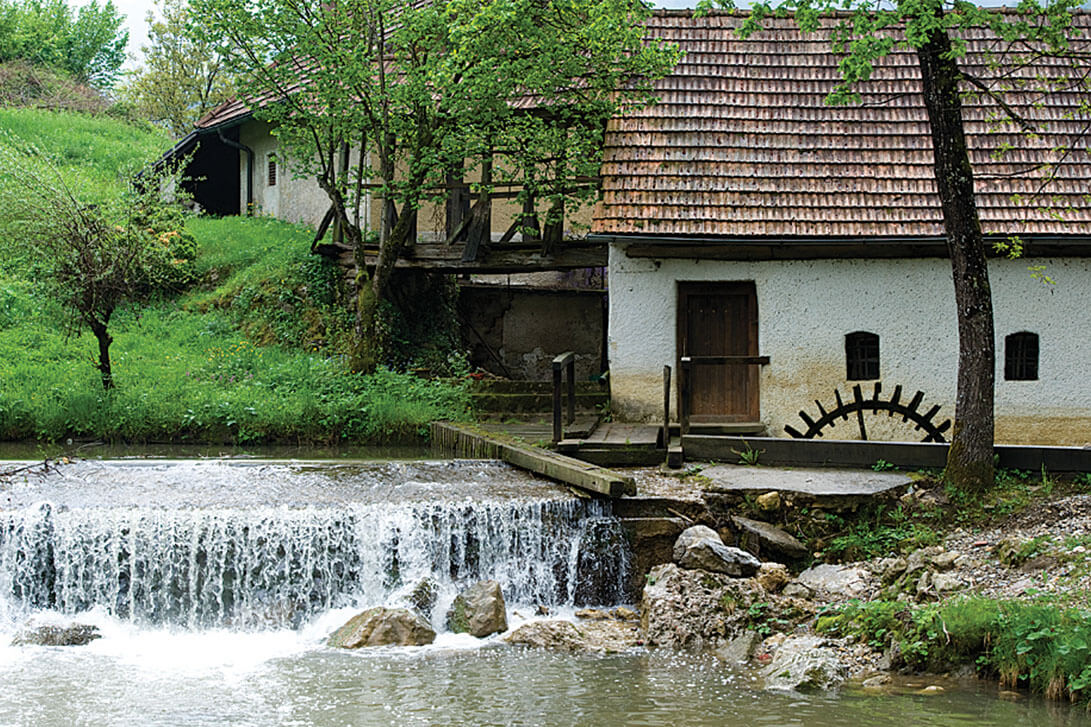 Karst particularity with its legend

Gruska Cave, also known as the Hermit’s Cave, is a karst gable valley that begins with a 30-metre overhanging wall. It was probably created when the ceiling o a cave crumbled. Water sometimes flows down the overhanging rock, and this is the source of the Gruska stream, which gave the name to the cave, while locals will also tell you that a hermit used to live in the cave during the First World War, thus the alternative name of Hermit’s Cave (Puščavnikova jama). A legend says that this was once the location of a rich market square that sank because its inhabitants feasted, drank and danced on a Good Friday. 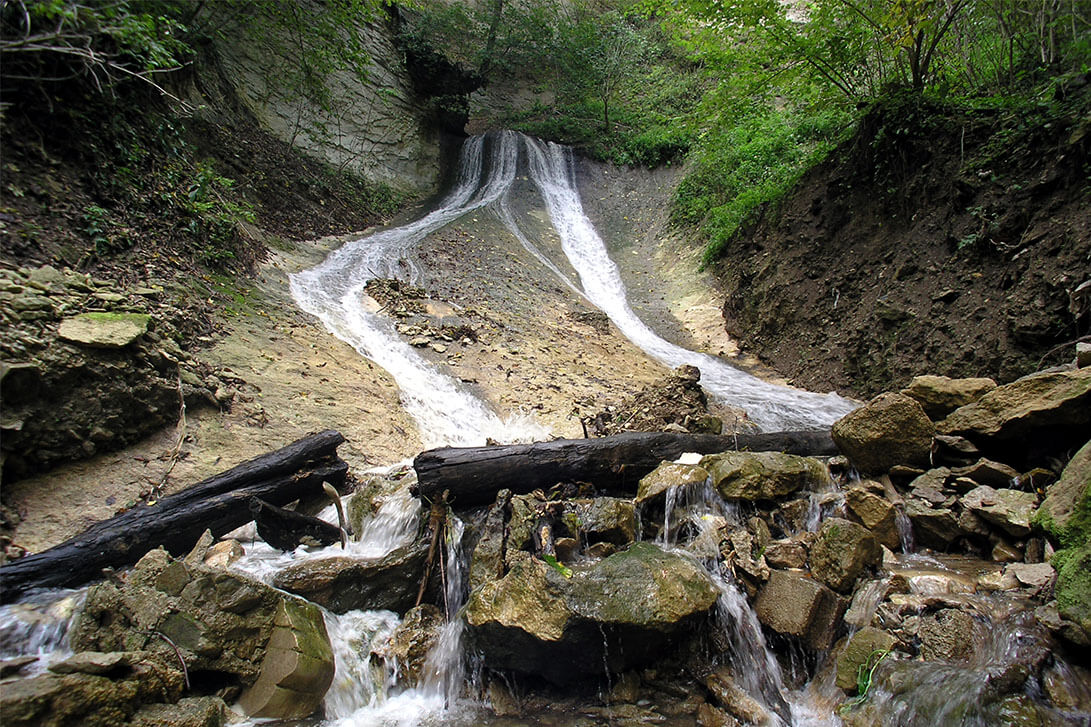 Lurška (Lourdes) Cave lies 250 m south from Saint Mary’s Church at Zagorje pri Lesičnem. Under the 19-m tall sandstone rock shelter, a small altar has been set up, where the healing water springs from. When visitors arrive to the site, a majestic view of natural beauty opens up, and refreshment with cool water from the source. Lurška Cave is also the venue for various ceremonies and events. 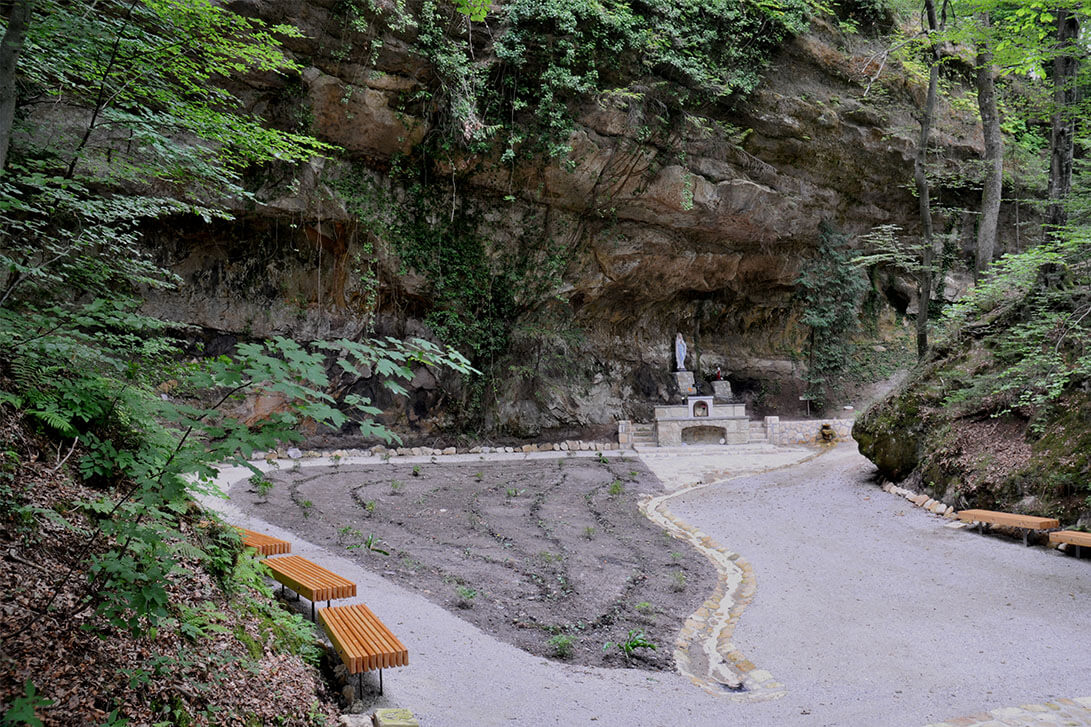 Biotic diversity of the hillside meadows

The tallest pre-alpine parts of Kozjanski park – Vetrnik, Oslica, Bohor, reach heights of between 600 and 1000 metres above sea level. Sustainable farming has created one of the country’s most beautiful and richest habitats – dry hillside meadows with an exceptional biotic diversity. The hillside dry non-fertilised meadows used for traditional purposes are a true treasure trove of living nature, which changes its appearance on a weekly basis throughout the season. Thanks to the colourful flowers, the meadows are at their prettiest from May to August, and in October, one can marvel ant the diversity of waxcap grasslands. 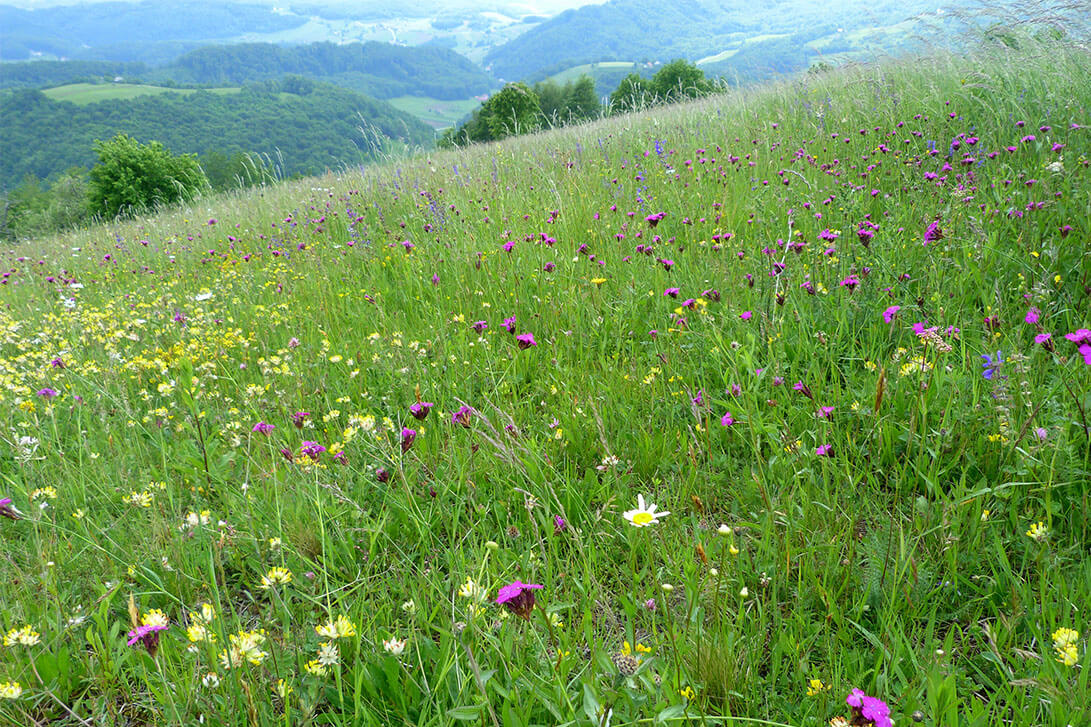 The first mention of the Posreda as a market town dates back to 1377 when it was granted the usual rights and privileges, which is attested by the well preserved pillar of shame or pillory. Today’s Podsreda is an interesting market settlement with traditional land parcelling. Its spatial position makes it one of the special areas of exceptional cultural landscape. The settlement has the status of a cultural monument. Visitors may go for a stroll in the immediate vicinity of the town by following the so-called Podsreda footpath, which connects natural and cultural curiosities with one branch of the trail leading to Podsreda Castle. Other attractions include the pillory, floral water treatment plant, Carjevič throne and St John the Baptist church, and the Slovenian-Bavarian house with the statue of Anton Aškerc. 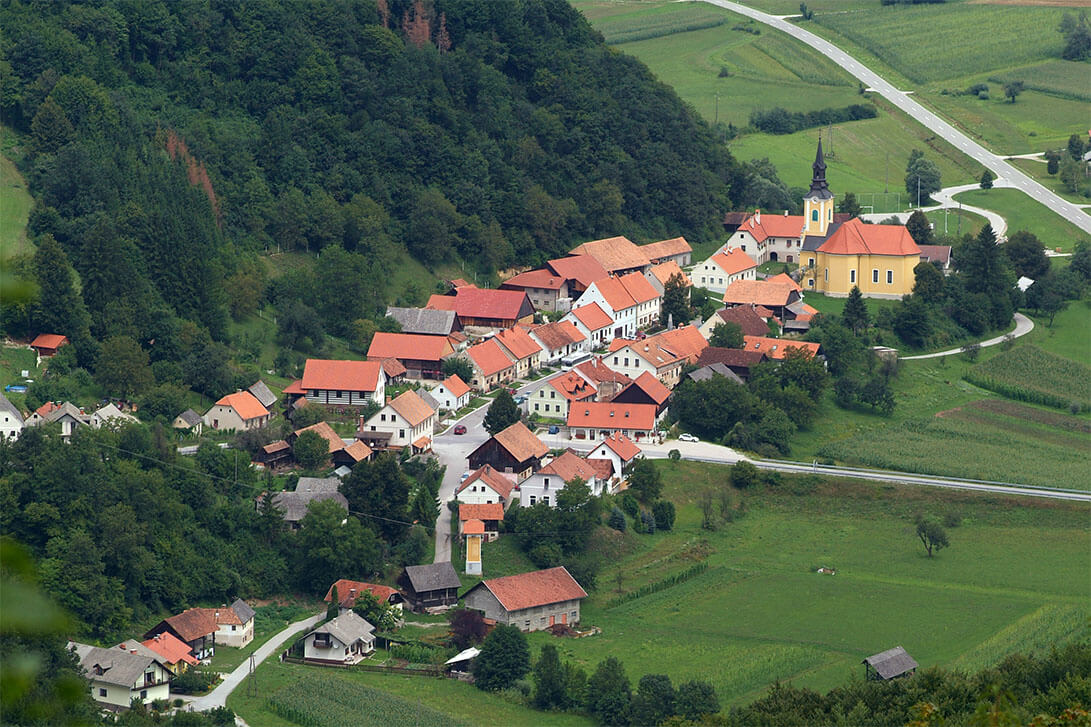 Picturesque gorge of the Bistrica River

The Bistrica is a very typical river of medium high mountains. The vast gravel deposits in the river bed attest to its torrential nature. It is famed for its picturesque and clear waters and characterised by the alternating wider and narrower valley parts along its course. Between Trebče and Zagaj, Bistrica has carved a gorge some 3 km long, which is so narrow between Rebrija and Tisovec as to make it impassable. The slopes are steep, rocky and forested, they rise to over 400 m to the south. This is the best preserved and most picturesque gorge in East Slovenia. 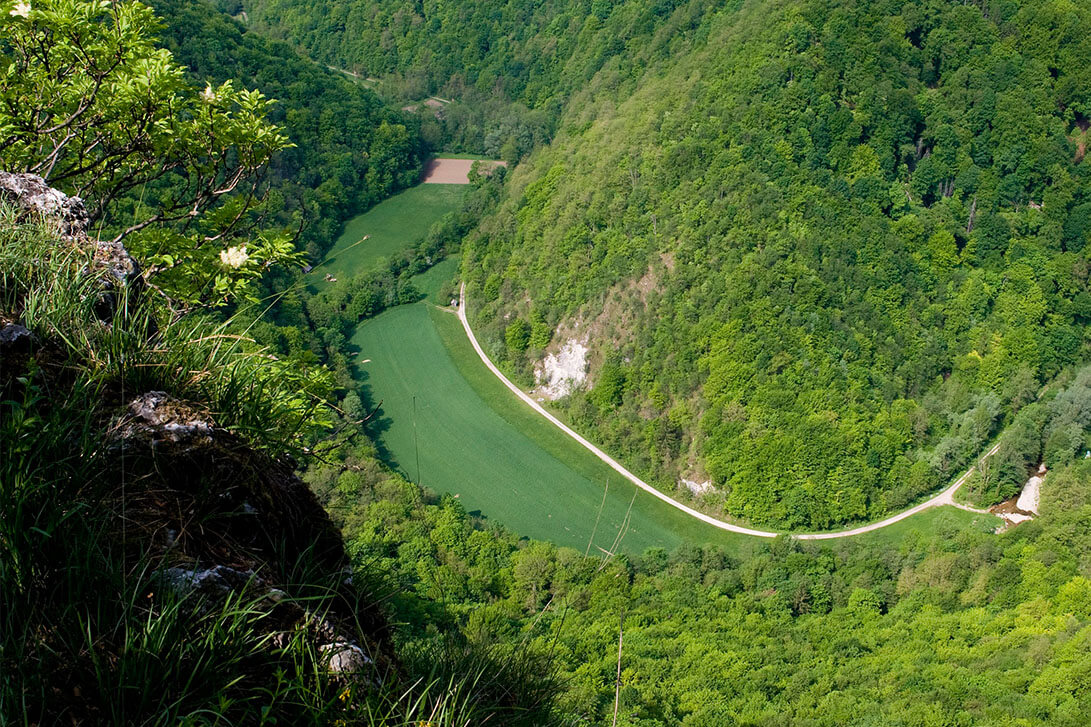 The Zelenjak Gorge is precisely what its Slovenian name (zelen = green) suggests – an area of greenery, peace and quiet, but also an area of a border spanning centuries. A decidedly narrow gorge that the River Sotla carved relentlessly into the rocks, is the narrowest part in our area that separates neighbouring countries. And just as it separates Slovenia from Croatia today, it used to separate Austrian Styria from Hungarian Croatia. The steep slopes, forests, solitary rocks and karst phenomena are home to numerous animal species and a rich flora. The Zelenjak Gorge was proclaimed a natural monument and it will certainly charm you as well. 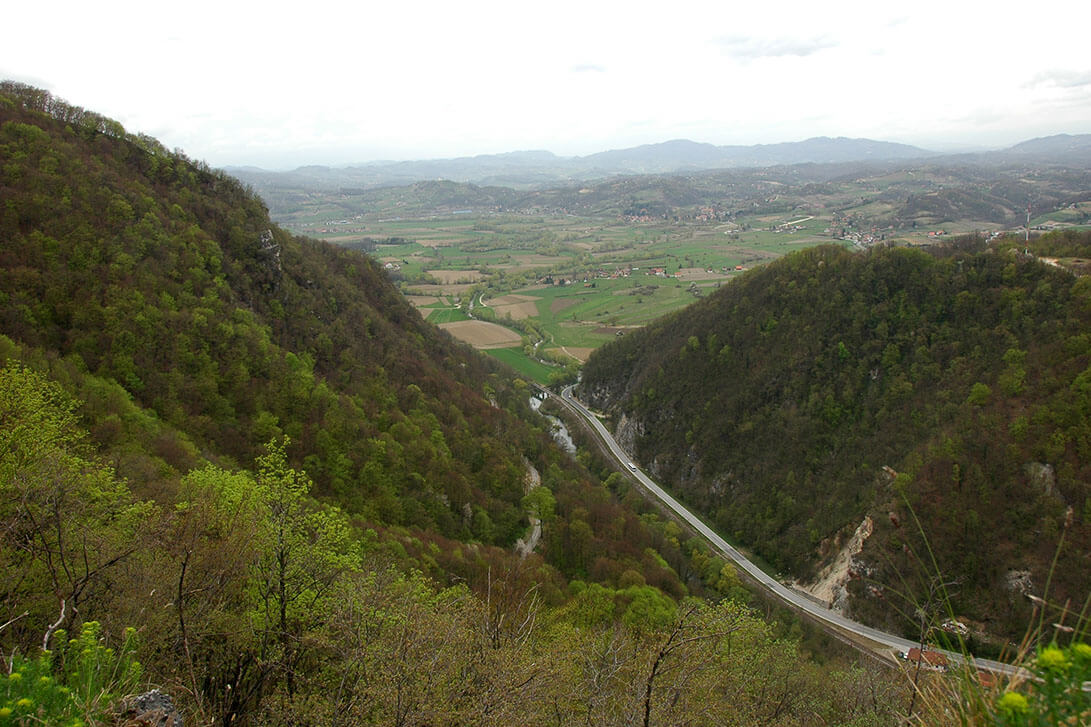 Home of one of the prettiest colourful birds – the bee-eater

The quartzite sand quarry of Župjek in Bizeljsko has become the home of one of the prettiest colourful birds of Slovenia – the European bee-eater (Merops apiaster). Its name stems from its diet, as it ieats wild bees and other large insects that it catches in flight with incredible agility. One should also mention that for many years, this was its only nesting area in Slovenia. In order to prevent visitors from disturbing these rare birds, an observation hut has been erected at a suitable distance from the nesting wall, with an information panel right in front of it. We recommend using binoculars or a telescope to observe the birds. 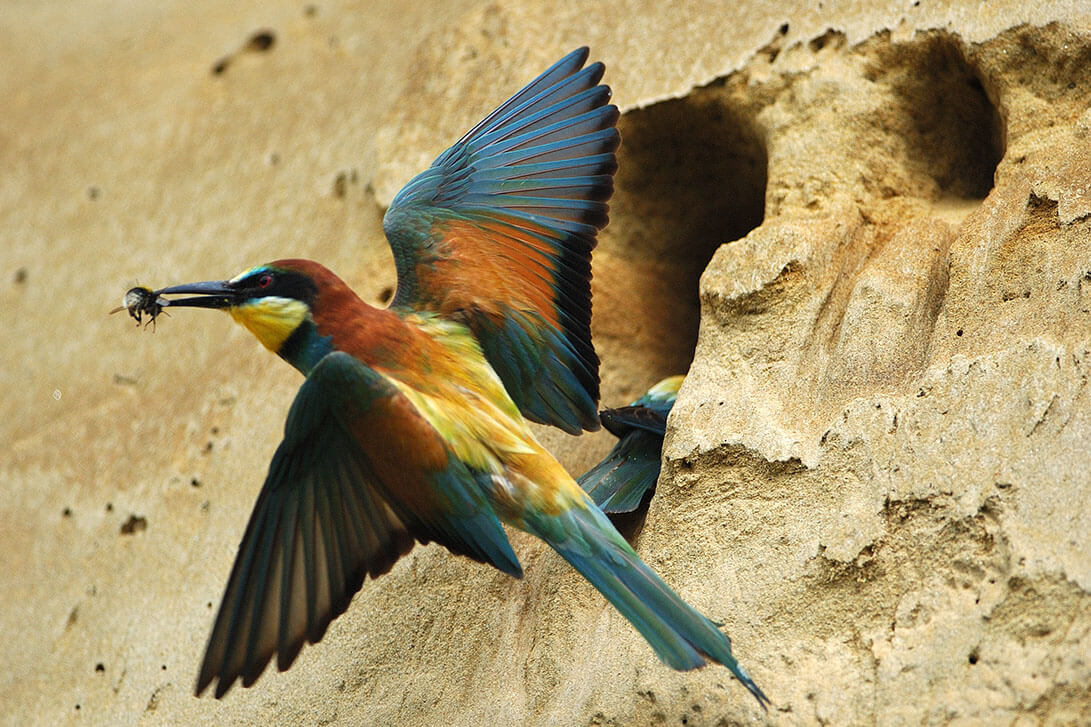 Feast of the Kozjansko apple

The feast of the Kozjansko apple is one of the events that greatly contribute to the identity of Kozjansko. The activities are commonly described as an ‘environmental fair with a soul’. The excellent practice applied throughout the Park of keeping high-trunk grassland orchards results in healthy apples that are ‘more than just a fruit’, preserved traditional landscape, nature and sustainable development. The event aims to demonstrate the work and efforts made to protect natural values and preserve the rural cultural landscape of Kozjansko, its crucial recognisable landscape element being precisely the high-trunk grassland orchards with old apple varieties. 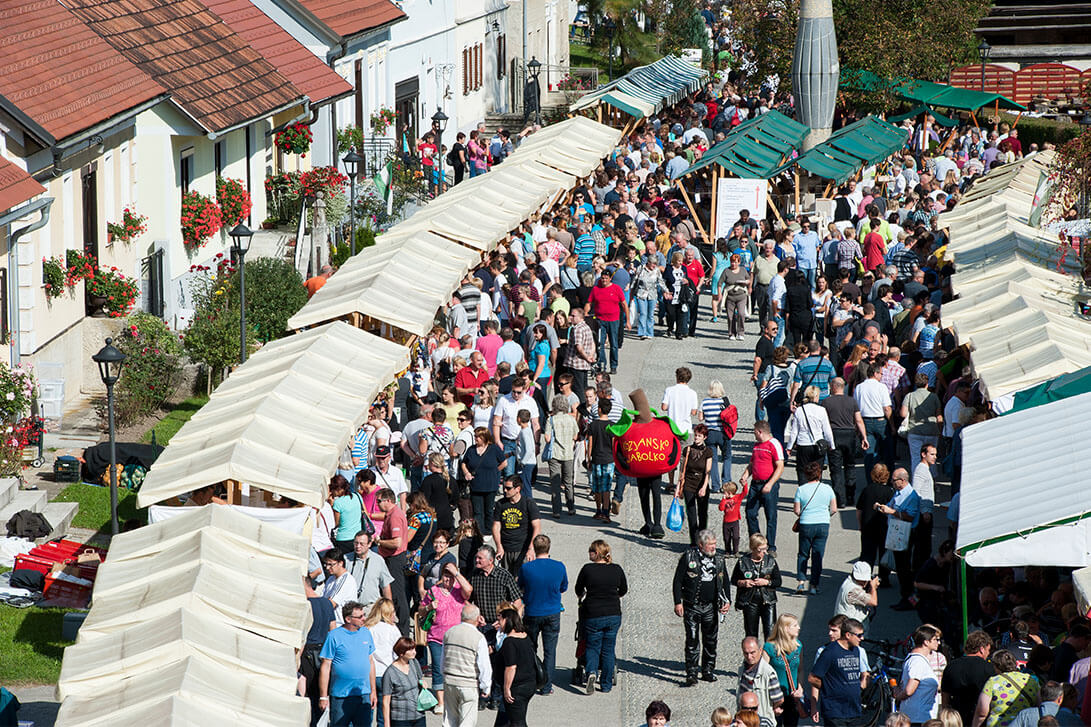 At the Čerček homestead, you may visit their nursery and collection high-trunk grassland orchard where over 100 traditional apple and pear varieties are planted. The original collection orchard extends over 2.3 ha and is farmed organically. Each tree in the orchard has a label with the name of the variety (both in Braille). The orchard is home to useful organisms – hotels for insects, nesting and feeding areas for birds, and they also organise various flora and fauna research projects, workshops, practical displays, as well as natural science and project daytrips for schools. 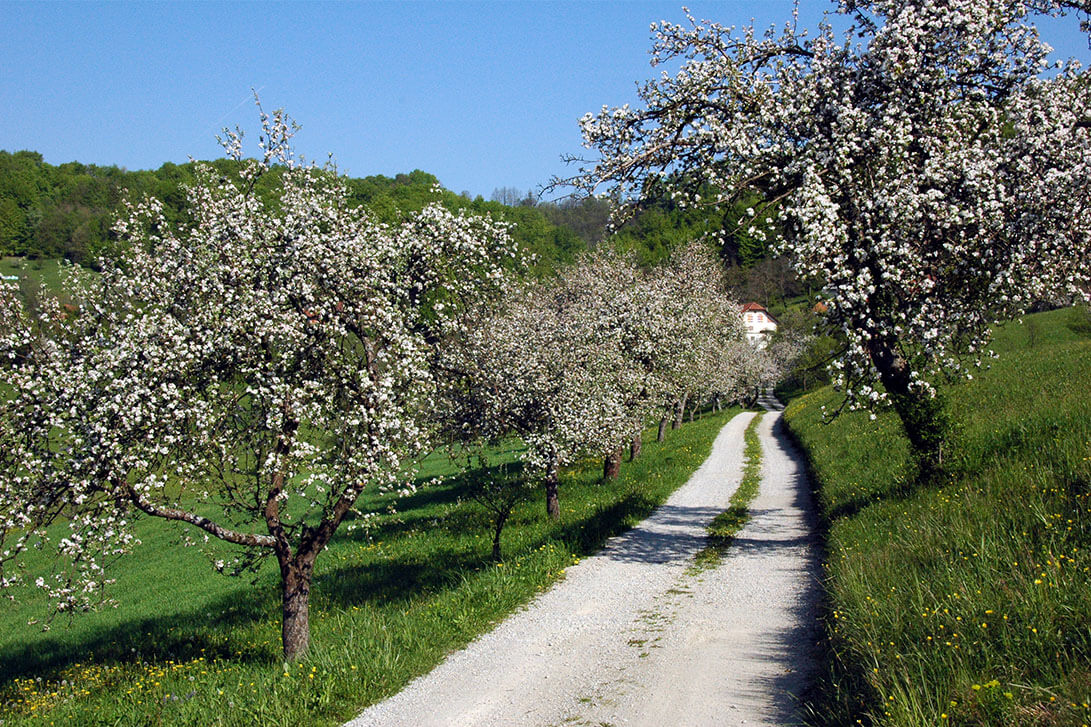 KP Management office at Podsreda: from Monday to Friday from 7h to 15h
Podsreda Castle: from Tuesday to Sunday from 10h to 18h (March-November)
More info on the Kozjanski park website.

Other attractions can be visited throughout the year based on a preliminary booking made with the Kozjanski park Management Office.

THE FAIRY TALE AND FANTASY LAND

The Witch’s hut is always an interesting proposition. You will enter the secret land of fairy tales and fantasy, see how people used to live and admire souvenirs from various corners of the world. Here, you will achieve perfect relaxation and return to reality filled with joy and optimism.

Highlighted sentence or two to »catch the eye« (150 characters maximum) A calm and pleasant break for the entire family – you’ll love the numerous opportunities for sports or just a pleasant hangout.